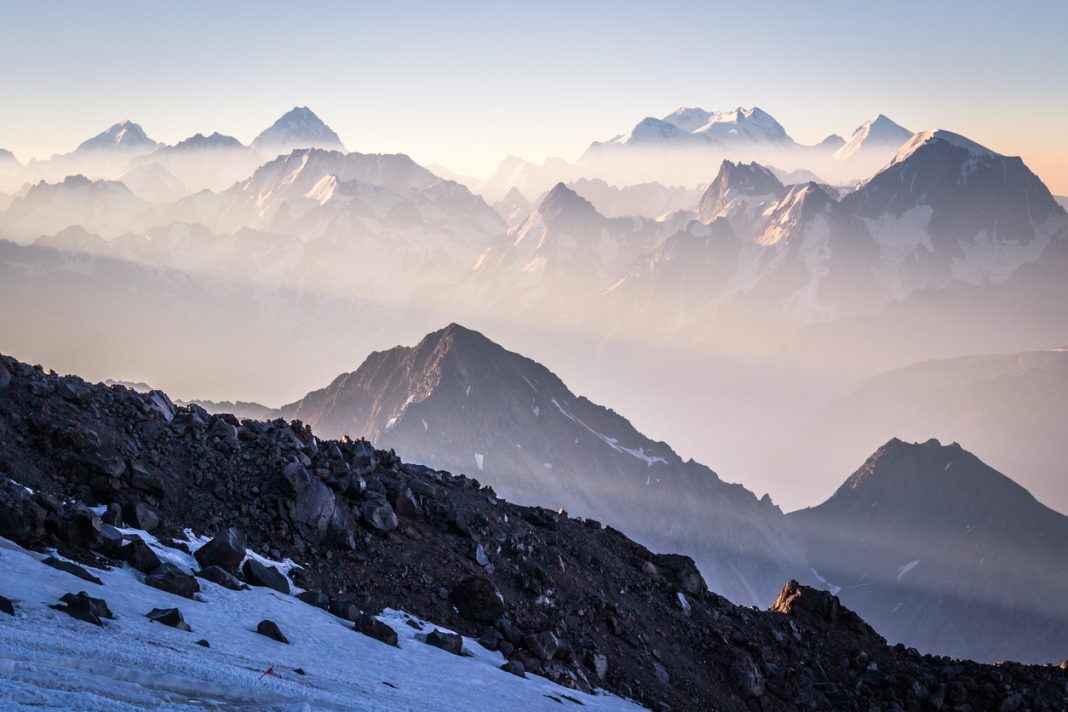 When you think of Europe, what’s the first thing that comes to mind? Cobblestoned streets and tree-lined boulevards? Delicious food and German beer? How about the snow-capped peaks? No, not the Alps. There are lots of other impressively high peaks across Europe, especially among the mountains in Eastern Europe. So, for the adventure traveller who isn’t afraid of a bit snow (and the towering height), here’s a list of some of the highest mountains in Europe for you to add to your bucket list this year. Whether you’re a professional mountaineer or an enthusiastic amateur, these peaks are definitely worth a visit. Climbers should be sure to stay safe and follow all the mountain climbing safety tips. For the not so adventurous, you can just gaze up in awe at their beauty and majesty from the foothills, or try to ski and indulge in some other sports, it’s a win-win either way. Let’s take a look at the top 10 highest mountains in Europe. Ready to go?

Witness The Grandeur Of The Top 10 Highest Mountains In Europe

Topping our list of tallest summits in Europe – Mount Elbrus. A part of the Caucasus mountain range in Russia it is actually the highest peak in Europe, as well as one of the world’s seven summits – the highest point on every continent. The mountain itself sits near the border with Georgia.

Elbrus has two summits, both of which form a double-coned volcano. Don’t worry though, the last known eruption was in the year 50 AD. It clocks in as the tenth tallest in the world, at a height of 5,642 m (18,510 ft), which is 832m higher than Western Europe’s highest mountain, Mont Blanc. Despite this, the tallest mountain in Europe is said to be quite easy to ascend, though not without its challenges.

Location: Mount Elbrus is located in southern Russia, in the western part of Caucasus mountains near the border with Georgia

If this article doesn’t demonstrate that the Russian Caucasus mountain range is just as majestic (if not more) than the Alps, nothing will. Dykh-Tau, whose name means “jagged mount,” is the second-highest peak in the Caucasus range in the European continent. Located near the border with Georgia, Dykh-Tau is 5,205 m (17,077 feet) at its highest point.

Dykh-Tau is best accessed from the Russian village of Bezingi which has a special Alpine Camp at 2180m. Climbs take at least 13 days and can be quite challenging. The area is also known for frequent avalanches.

First ascent: Mummery and Zarfluh, in 1888 were the first climbers to summit Dykh-Tau

Temperature: Summer average temperature in 24 °C, while the average in winters is −4 °C.

At 5,201 m (17,060 ft), Shkhara is the third-highest peak in the Caucasus mountain range. It is located in Georgia, close to the city of Kutaisi, and is the highest point in Georgia. The peak is also the high point of the Bezingi Wall, a 12-kilometre-long ridge along the Georgian-Russian border.

Shkhara is notoriously hazardous and is called one of Europe’s most tough climbs. There are high levels of snow all year round, and the terrain is treacherous, rocky, and steep. Though there are great risks, there are also great rewards, as there are also truly breathtaking views. However, for those dissuaded by this peak, be sure to check out the charming nearby Georgian village of Ushguli at the base.

First ascent: U. Almer, J. Cockin and C. Roth, in 1888 were the first climbers to summit

Moving back across the border to the Russian segment of the Caucasus mountain range, we find Koshtan-Tau, another impressive one among the many peaks in Europe. It is the highest peak of the Koshtan massif, and with an elevation of 5,144 m (16,877 feet) is the fourth highest mountain in Europe.

Situates close to the Georgian border, its steep altitude means that it is covered with snow throughout the year, making for some particularly scenic vistas.

First ascent: Herman Woolley and party, in 1889 were the first climbers to summit

Location: It is located in thecentral Caucasus Mountains in the Kabardino-Balkaria Republic of Russia, near the border with Georgia.

Temp: The average annual air temperatures in the high altitude zone are low. Thus, the altitudes of about 2000 m usually enjoy positive (+2.9°) figures.

Though it may not technically be in Europe (rather being in Eurasia), Mount Ararat is one of the highest peaks in the region. Located on the borders between Turkey, Armenia, Azerbaijan and Iran, it actually consists of two major volcanic cones: Greater Ararat, at an elevation of 5,137 m (16,854 ft) and Little Ararat, at 3,896 m (12,782 ft).

According to local legend, Mount Ararat is said to be the resting place of Noah’s Ark, and is also considered sacred by Armenians. Mount Ararat is a fairly active volcano (with the latest eruption occurring in 1840) so be sure to take the necessary precautions.

First ascent: Friedrich Parrot and Khachatur Abovian, and party, in 1829 were the first climbers to summit

Location: The mountain islocated in the Eastern Anatolia Region of Turkey between the provinces of Ağrı and Iğdır.

Also Read: 25 Places You Must Visit In Turkey This Year

Known as the highest mountain in the Alps and Western Europe, Mont Blanc is located at an exhilarating crossroad between France and Italy. Although the summit is technically in France, Mont Blanc, Monte Bianco, or “White Mountain” also reaches into Switzerland. The mountain is covered with glaciers for approximately 40 square miles and even features the Mer de Glace glacier, the second-longest in the Alps. At a stunning height of 4,807 m, Mont Blanc offers stately views from the top along with the option to ski or go snowboarding and indulge in other winter sport adventuring, and of course, mountaineering. When it comes to famous peaks, you can’t miss this one.

First ascent: Mont Blanc was first conquered by Jacques Balmat and the doctor Michel Paccard in 1786.

Location: Mont Blanc is located mostly in France and Italy.

Temperature: The average annual temperature in Chamonix-Mont-Blanc is 7.3 °C

Another treat from the Alps, Monte Rosa is located in the eastern part of the Pennine Alps. Monte Rosa is considered the highest peak in Switzerland, and the second-highest in the Alps. Lying on the frontier between Switzerland and Italy, Monte Rosa is one of the main attractions of the famous European mountain range. The Monte Rosa Massif has around ten peaks higher than 4000, its main peak, Dufourspitze measures 4,634 m (15,203 ft).

First ascent: The first ascent of the highest point on Monte Rosa (the Dufourspitze) took place on 1 August 1855 by a rope team led by Charles Hudson.

Temperature: Monte Rosa is snowy year-round with the temperature here can reach as low as −40 °C

This Alpine beauty is the third highest peak in the Alps range and is located between Randa and Saas-Fee in the canton of Valais in Switzerland. Clocking an impressive 4,545 m (or 14,911 ft), the Dom is the highest mountain which is located entirely on Swiss territory and is quite the beauty when it comes to peaks. This majestic peak is named in honour of the Domherr (“canon”) of Sion, Joseph Anton Berchtold, the first person to survey the Mischabel group in 1833.

First ascent: The Dom was first climbed in 1858, by the British alpinist JL Davies.

Location: The Dom mountain is found in the central axis of the Mischabel group, located between the Täschhorn and the Lenzspitze.

Another major peak in Switzerland and the Alps, Weisshorn is one of the many 4000ers surrounding Zermatt, with Monte Rosa and the Matterhorn. This peak is situated between the valleys of Anniviers and Zermatt in the canton of Valais and is also a  part of the Pennine Alps.

First ascent: The mountain was first climbed in 1861 by the 29-year-old physicist John Tyndall, with guides J J Bennen and Ulrich Wenger.

Location: It is located between the valleys of Anniviers and Zermatt.

Also known as the mountain of mountains, Matterhorn is one of the most popular peaks in Europe and straddles the main watershed and border between Switzerland and Italy. This large, near-symmetric pyramidal peak offers a paradise for all nature-lovers looking for peace and quiet. Rising up to a height of 4,478 metres (14,692 ft), Matterhorn is one of the highest summits in the Alps and Europe. It is also featured on the packaging of the world-famous Swiss chocolate – Toblerone.

First ascent: British mountaineer Edward Whymper in 1865 was the first to summit the Matterhorn.

Location: It is located 6 miles (10 km) southwest of the village of Zermatt, Switzerland.

Also Read: The Best Of Things To Do In Switzerland That Are Free

What’s Your Take On These Top 10 European Mountains?

Mountains are no doubt fascinating and awe-inspiring structures of nature. Climbers across centuries have wanted to summit these magnificent peaks and climbing one is truly an achievement of a lifetime. Some even offer the option to ski down their slopes. Have you climbed or are you interested in climbing to the summit of any of these top 10 peaks in Eastern Europe? If so do share your stories and thoughts in the comments section below.

FAQs About Highest Summits In Europe

What is the highest mountain in Europe called?

Mount Elbrus is the highest mountain in Europe.

Which European country has the highest peak?

Russia has the highest peak.

What are the three highest mountains in Europe?

Why Would You Want a Tent On the Top of Your Car?

Gravity Defying Place, Oregon Vortex Is What You Need To Visit Once

Want To Know Which Are The Top 4 Haunted Hotels In India?

Mysterious Places In India That You Must Visit

Most Dangerous Places In The World Where You Can Travel To